My HDSP MADI PCI card recently began malfunctioning on a cold boot, but eventually works fine after a second shut-down/reboot.

Here is the scenario:
If the PC's PSU has been off (I power down my UPS when we're done for the day), and I power it on and do a fresh "Cold Boot", the HDSP MADI is detected, and the HDSP and Totalmix apps are accessible.  However, the card won't "Sync" (says "MADI - Lock", and "Wordclock - No lock").  No ASIO I/O activity or "live inputs" are present in Totalmix's meters.  Nuendo doesn't show any audio activity on its own meters even when playing pre-recorded tracks, and Media Players (WMP, Media Monkey, VLC) freak out when trying to access the card.

A "warm reboot" generally won't resolve the issue.  I need to "Shut Down" - and then re-power the system.  After the "warm" power-down/reboot, the MADI card works fine (shows "Sync" on both clocks, and all ASIO works as it should).

This has been happening at every "Cold Boot from a powered-off PSU state" since the problem initially started about a month ago.

Does this sound like a BIOS/PC issue, or a potentially malfunctioning MADI card?  Should I look for a standby card so I'm not out of commission if/when this card finally dies?  (I know that's a good idea regardless - but money is tight at the moment).

I recall one of my HDSP Digiface cards that started to act funny (wasn't shown in the Device Manager on a fresh boot more and more often) and then it finally died.  Does my MADI issue sound like it might have a similar fate in store?

Thanks for any input.  I love my HDSP MADI card and Multiface/Digiface setups for sure!!!

You can remove the card, clean its gold contacts, and also try a different PCI slot. Did you add another hardware to the computer about a month ago?

I should have know to try that first :-)

I did a combo of that, cleaned the card itself with a soft toothbrush to remove any possible shorting issues on the PCB, and un-hooked my DVD Burner which seems to be failing (just discovered this fact upon troubleshooting!).  I'm not sure, but I think the failing DVD player might have been what triggered this odd behavior on a cold boot.  Who knows.  The card needed a good cleaning anyways.

Regardless - all good now.  I'm still on the hunt for a backup card to cover my backside.

Thanks MC.  RME is tops!

FYI - Found a backup HDSP MADI card on eBay for $425 shipped!  Now I should have all of my bases covered in the event of a failure :-)  I basically have a complete backup DAW PC should the need arise.

Wow. Believe it or not, this exact issue has bugged me for years now.
Card in sync only after second cold boot.
Tried everything (except the cleaning), and put it down to some obscure driver problem in my setup. Did contact support at the time, but not much help then.
Glad to hear that a) I'm not the only one and b) there is a solution. Will try it.

I'm not 100% sure if it was the cleaning or the fact that my SATA DVD Burner was beginning to fail at this same time (started getting OS CRC errors when accessing the DVD).  I didn't have time to systematically test each "fix" in isolation, so I did both at once.  I have a feeling it might have been the DVD-R freaking out somehow.

I'm also running a SSD in this system, so I'm not sure if that could play an issue with the timing of the boot process compared to when the drivers are loaded, etc (boots to desktop in like 4-5 seconds after it hits the bootloader!).

In addition to cleaning the contacts, I cleaned the card itself (mainly all of the little IC's and their tiny traces crammed in tight quarters) with a soft toothbrush for good measure.  I do have smokers around here - so I had a little funk on the card.

I've cold booted the system over a dozen times since my last report, and it seems to be working as expected.  Fingers crossed (and spare card on the way just in case! :-) )

Give the cleaning a shot IMO.  Best of luck

I got the Same Problem

Hello I have the following problem in my recording studio computer

RME HDSP MADI card installed (PCI - slot 1)
this is connected to an Antelope Orion 32 via MADI (optical) and blocked via Word Clock (BNC)
Master is the Orion (sample rate: 44.1kHz)

now to the problem:

After a cold start (PC was disconnected from the power), Win starts up normally
however, the RME card cannot be synced No matter what I change on the card (software) or on the Antelope Orion 32
only after I shut down the computer and start it again (sometimes several times) does the card recognize the Orion and sync itself. 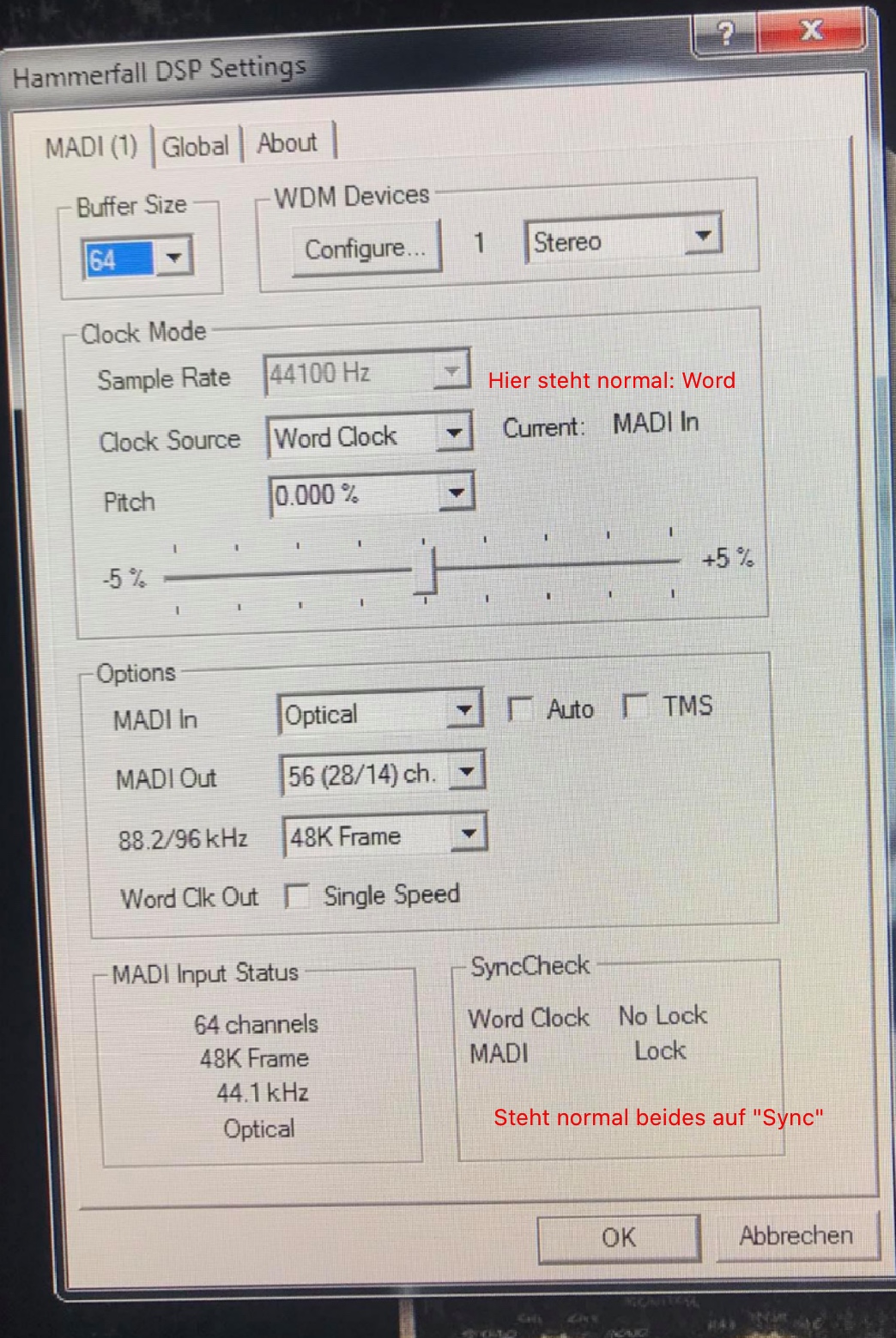 Of course, I've already tried a few things:
-Driver Uninstalled (newest / older version)
-Card in another PCI slot
-Card cleaned (compressed air and isopropyl contacts)
-Try all the sync scenarios, sometimes the RME as master, sometimes the Orion, sometimes with MADI Sync, sometimes with word clock
-I also completely disconnected the Orion. Same problem after cold start.
-A loop connection with MADI made (IN to OUT) same problem after cold start
-Firmware updated at the RME like Orion 32

-> However, the internal headphones output works.

My guess:
- The Antelope Orion 32 is definitely fully functional
- Since the RME card works when you restart it, it is probably not defective (maybe ELKOS?)
- Problems in Win7
- Settings on the RME Panel / Digicheck / Totalmix
- BIOS settings / problems
- CMOS battery
- maybe i do some failure in the connection to Orion 32 ?

Thank you for any possible solutions.