I would like to share some of my experience with the RME Babyface as a portable recording device.
I use it with an ipad mini and an external battery with 10.000 mAh and it took me a while to figure out what causes the problems that I experienced.

CLASS COMPLIANT MODE:
Running the Babyface in CC Mode works as long as there is enough power for it and sometimes it's not obvious that there's not enough power for it. The Babyface might seem totally normal, and the LEDs are working as they should but if there are some problems regarding power (power peaks) - the program you work with on the ipad will start to act weird.
I work with Auria as my main DAW on the ipad and insufficient power can result in wrong timecode, slow recording, crackles, blackouts during recording and the ipad might unmount the Babyface from time to time.

As every setup is different I can only speak for my 10.000 mAh battery pack that i had bought on amazon (easyacc -27€) but it might also happen with other battery packs. This one has two USB connections - one labeled with 1A and one with 2A.

First of all, I can use the Babyface in CC mode with microphones that don't need 48 Volt Phantom Power (dynamics + ribbons) running from the 1A USB output of the battery. This works flawlessly!

Phantom Power nevertheless caused problems and even using the 2A USB output did not help. Auria was unstable and in the end unusable - sometimes it worked for minutes but everything acted weird and I had lots of problems. It might seem that the problem is Auria or the ipad but that's not the case - the problem are power peaks.

So I bought a USB Y-Power adapter cable (see picture) to connect the two usb ports of the battery (2A and 1A) at the same time. I connected his Y-Cable to the Y- Cable that RME provides to power the Babyface. Now 48 Volt mode on two channels is possible without problems!

Stand alone mode is an amazing feature. With an external recorder (like a Zoom H1, H2 or others) you can record two microphones (using the RME preamps!) and record the signal via the line-in of the recorder. This is the smallest setup I ever had to record audio in good quality. It doesn't need as much power as CC Mode but you can also run into problems when using Phantom Power in stand alone mode:

1A battery output connected to Babyface:

With 48 Volt engaged I experienced high pitched noises that are connected to the flashing LEDs of the Babyface. Every time there is some signal
that makes the LEDs light up there is a high pitched noise that is added to the signal. You have to listen carefully as it's only added if there is some sound and you might not hear it when there is silence. You can help yourself by selecting "OUT" on the Babyface and reduce the level to the minimum so the LEDs won't flash at all or you change the power connection to the 2A USB plug of the battery. I recorded the line signal from the phones output to feed my external recorder, so i didn't need the "OUT" to have any level at all.

2A battery output to Babyface:

No problems with 48 Volt Power. Enjoy!

In general: Once you set the levels for the input source at the Babyface - switch to display the output that you don't need (phones or out) and reduce the level to a minimum to have no flashing LEDs. This should prevent noises even if the power drops.

I hope I could help some of you. I'm absolutely amazed by the new possibilities of the Babyface and I can't wait for the Totalmix FX APP!

PS: RME - if you still need some beta testers for the Total Mix App you are highly welcome 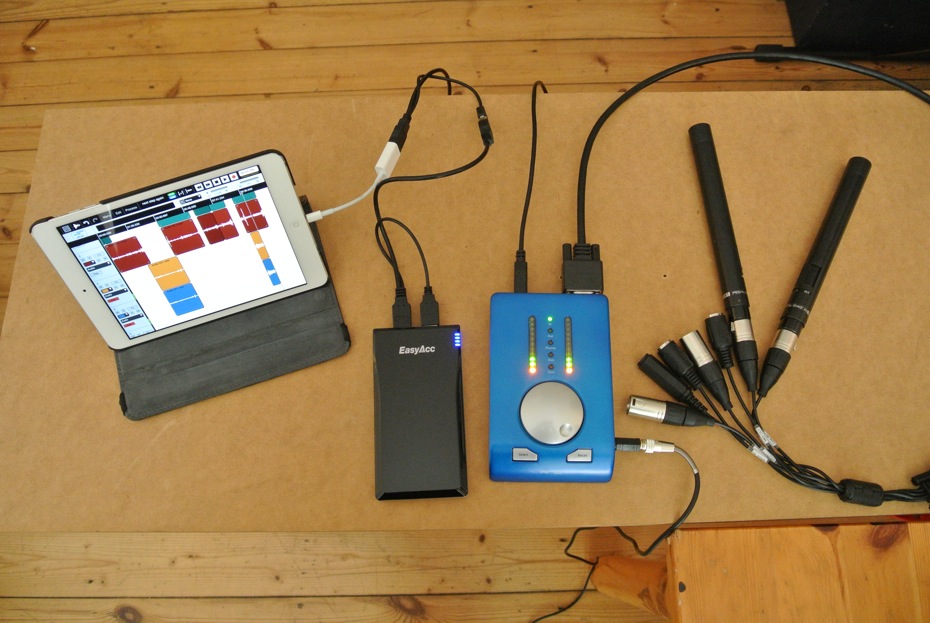 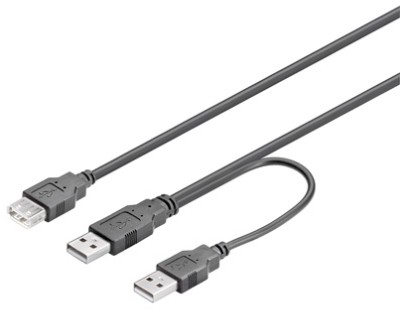 Re: Experience with usb battery pack for babyface in cc & stand alone mode

I did some testing during a rehearsal session, and the results were kind of disappointing.
I ran into several problems and I can't tell for sure if the problems are caused by the ipad, auria, the CC Kit (original), the battery pack (http://www.amazon.de/EasyAcc-10000mAh-P … 00BJCHH36/), the USB cable or the Babyface.

My setup:
2 condenser mics (mbho) powered with 48 Volt connected to Babyface, Babyface powered by easyacc 10.000 mAh battery pack with two usb outs (1xA2 1x1A) connected at the same time via a Y combination cable that allows power from two ports to feed one usb connector of the original RME Babyface USB cable. The other USB port of the RME Babyface cable was connected to the CCK Kit and then finally the CCK Kit was connected to the ipad. The ipad itself is running 6.1 has notifications, autolock, bluetooth and wifi switched off.

Problems:
This setup would be running and recording for minutes and then the screen would turn black - no recording left just the lock screen appears and the data is gone.
I could recreate this situation and noticed that timecode would stop counting in Auria before it freezes then after some time the lock screen would appear.
Sometimes I had no input in the input matrix of Auria but it shows me the input on the Babyface.
Sometimes my ipad just turned black with no lock screen and I need to restart it - after being not responsive (just black) for minutes.
Sometimes Auria didn't switch into USB mode and would stay in INT audio mode.
I also tried Cubasis a few times - which stops recording and freezes to crash as well.

After all this problems, I decided to reord the session via Standalone mode and an external line-in recorder (Zoom H1)
In standalone mode I also had high pitched noises - less with 44.1 and 48 Khz but lots with higher sample rates when connected to the two usb ports of the battery pack.
Using just one Battery port (1A) and a lower sample rate (44.1) made these noises disappear in 70 % of times.
Clicks and big overloads or just one channel working in  - this happened even with USB cable powered via the USB charger (white ipad 1A charger in the wall socket).
The problem occured twice during the session and I needed to restart the Babyface three times in a row to get rid of it. (Audio samples will follow)

When I started out recording with the pad, my battery pack was loaded at  80% - when I decided to switch to stand alone it was at about 45 %.
I'm still testing, but it's kind of frustrating as there are several symptoms and they appear for several - not logical - reasons -  it's a bit like playing russian roulette.

Questions:
When you guys write about mobile operation "We tried one of those small 4,200 mAh for around 20 Euros. The Babyface worked for more than 6 hours while playing music from the iPad."
Have you also made tests with recording with condenser mics running on phantom power? In stand alone and CC Mode?
Do you have any recommendations or tips regarding a better, more powerful battery pack?
Most of them are made by Chinese brands and it's hard to get any specs of them besides the mAh and the USB ports.
Is there a certain order how to connect and start things?
(So far I connect the easyacc and the Babyface, power it up, connect the cc Kit and finally connect it with the ipad.)
Is it possible to power the Babyface with battery that is not connected to USB but to the power supply input? If yes, could you send me a link to one that would work?
I'm looking for a possibility to record with my ipad and the Babyface and two condenser mics at 48V in "the field" running on battery power.

Another question regarding monitoring latency:
When I turn Babyface in Stand alone mode and connect the optical out to in (to hear myself via phones) and set the sample rate to 44.1 Khz would it be possible to also use it with
Auria if Aurias sample rate is set to the same value of 44.1 Khz? This could be a solution for direct monitoring without latency of the program, right?

PS: Maybe it's possible to include a "Volt-O-Meter" in the ipad app that checks if the device (Babyface- UCX) is running with enough power...