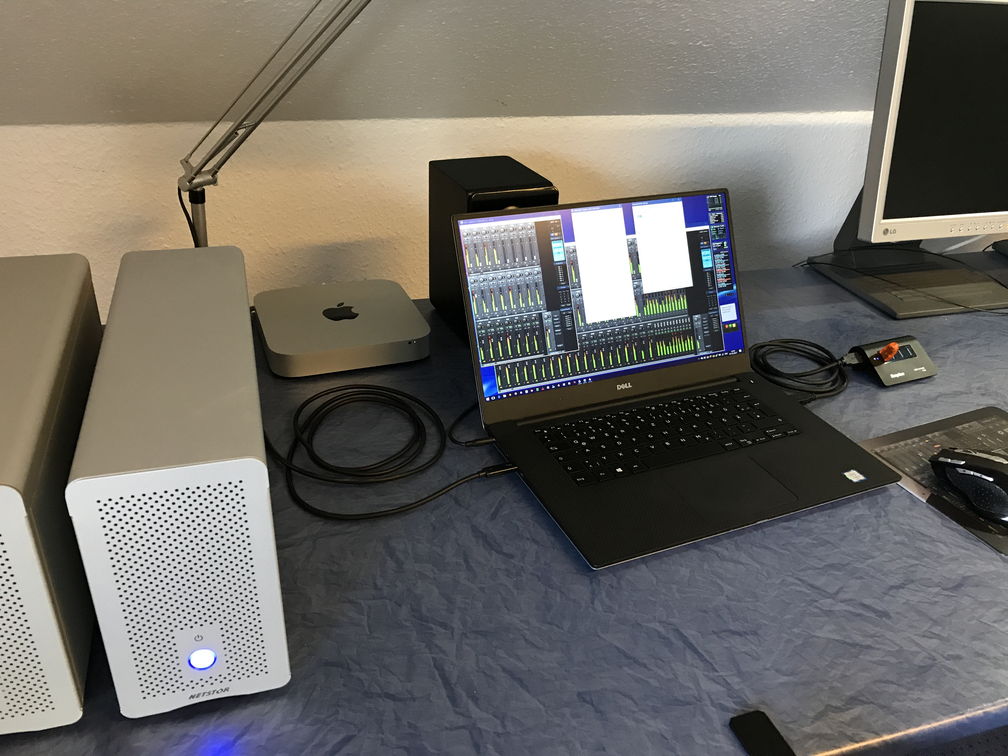 Design and form factor have not changed over the years - to the left you see the older PCIe to PCIe TurboBox. The Mac Mini in the background shows that Netstor's design fits nicely with Apple's design. For short audio cards the boxes are a bit longer than necessary, and the 3-slot version does not have spare slots to mount add-on cards for more I/Os or word clock. That is something to keep in mind, additional cards which do not use a PCIe slot need to be counted as if they do when ordering such an expansion box.

As you can read in the above mentioned reviews, and this is true even now years later, the expansion chassis are regularly used by RME developers and never failed. Not once. The available audio performance is defined by the used computer, not the chassis. Low latency at 32 samples is possible if the computer can do so. If not then the computer is at fault, not the TurboBox.

I am using the NA211TB3 regularly to use all our PCIe cards with a Dell XPS15 9550, a Skylake based laptop with a USB-C/TB3 connector. Usually a Startech TB3 to TB2 adapter is used to connect a wide screen monitor which has a TB2 hub, so I can connect a UFX+ via Thunderbolt as next device. Simple serial cabling that works a treat.

The NA211TB3 has a TB3 hub inside, which is absolutely nice to have. When connecting the expansion box to the latop,  its only USB-C port is occupied, which would mean no monitor and no UFX+ anymore. Instead of plugging the Startech adapter into the laptop it can now be plugged into the second USB-C port of the expansion chassis, and everything works like before - double treat! One just has to note that this is a TB3 hub. You can not connect USB based devices/adapters with USB-C connector, like Dell's own USB-C to VGA/Ethernet/USB3 dongle. It can't work as there is no USB on this hub. Adapters to USB/Ethernet etc. that are PCIe based will work, though. The photo shows the inside of the box with a HDSPe MADI and a HDSPe AES working on 80 channels input and 80 channels output simultaneously (note this is the bus load. To sync the cards I mounted the MADI's word clock module, which meant I could not mount the second card of the AES anymore. So externally only 72 channels were available). Now these days a laptop won't even raise its eyebrows, so to say, as one can also plug in the HDSPe MADI FX with 194 channels input and 196 channels output - and it still works without noticable base load.

The really nice thing with UCB-C/TB3 and the TurboBox is the hotplug behaviour that one gets with PCIe cards - which still astonishes me regularly, as I have seen the opposite on so many systems over so many years. With Windows 10 running, simply plug in the USB-C cable, the TurboBox immediately turns on, and there are the cards and audio channels. Finished your audio work - simply unplug the cable, the TurboBox will turn off automatically, the cards/channels are removed from Windows. No crash, no hang, no problem - amazing times!

I intentionally describe this behavior in detail under Windows. Of course it works the same on a Mac, but nobody would expect it NOT to work perfectly on that platform. Which it indeed does, flawless operation there as well. Regarding available latency - as mentioned it depends. The XPS15 is a real Dell - which means it won't give you lowest latency, no matter if USB2, USB3 or Thunderbolt. Currently the combination of HDSPe MADI and HDSPe AES needed 128 samples buffer size in ASIO to work click free. At 64 from time to time a small drop-out occured. The HDSPe MADI FX and MADIface XT also required 128 samples. I thought 64 samples worked before, but there are so many driver, OS and BIOS updates these days, you simply loose track what happens when...and I won't waste my time trying to improve a Dell's low latency performance! But else the XPS15 is a very nice unit, that's why I use it daily, both in home and when travelling.

How powerful modern laptops are became obvious when I connected the UFX+ via TB to the TurboBox second USB-C port, while a full channel test was running with the MADI and AES cards at 128 samples buffersize. I started to use the UFX+ with its TB driver on all 94 channels I/O, completely independent from the running audio test - and it did not cause a single glitch/drop out in that MADI/AES test. Wowza!

Using the MADIface XT via external PCIe (with Matrox PCIe/ADP card in the TurboBox) was another nice surprise, as those expansion cards never before were usable with hot plugging and unplugging. With TB3 in-between even that works.

Once again Netstor provides a perfectly working expansion chassis, this time for the latest USB-C/Thunderbolt 3 technology. It is fully compatible to all RME PCIe cards, from the old Multiface PCIe up to the HDSPe MADI FX. Well done, Netstor!

I'm also hoping for a small USB-C/Thunderbolt to Expresscard adaptor to appear, for the mobile user with Madiface XT, who want's to use it with external PCIe, and a modern laptop.

I expect direct USB-C/TB to external PCIe from Matrox or one of the others is too much to hope for, as they are now putting TB direct on their video interfaces of course.

However, over in the cheap seats, Startech TB31PCIEX16 could be a budget solution for TB3 laptops.
https://www.startech.com/en-nz/cards-ad … b31pciex16

Thinking of getting one for, Madiface XT via Matrox E-PCIe card, and also (at other times) HDSPe MADI FX.

I have used a TurboBox with a MADI FX system for maybe 10 years. I forget how long. Never a problem. I have been  looking at the 211TB3 wondering if there was any possibility that the USB C port would support USB 3.1 rev2. You just answered that question. Thank you.

I also was wondering if the PCIe host card for the Turbo Box could be somehow loaded into one of the PCIe slots of the 211TB to chain them in series for 2 x PCIe slots from the 211 and three more from the TurboBox but now that I seen what appear to be USB-C ports on the back plates, that would require quite a “mod”.