I'm using Babyface and recently I started using the MIDI Control to control TotalMix and noticed that it prevents Windows 10 from entering standby.  It happens more specifically if I have both the "Enable MIDI Control" enabled inside TotalMix plus inside the MIDI Settings I have Babyface Midi Port 1 for MIDI In.  Running Command Prompt as admin, and typing "powercfg -requests" reveals that what's preventing the standby is SYSTEM: RME Babyface "An audio stream is currently in use."  I do not have anything attached to the MIDI port.  Is this a normal behavior?

No such problem reproducable. MIDI is not audio, that error message would only make sense with FX enabled . Turn off Echo and Reverb to check if it works then.

Edit: I actually have 2 Babyface interfaces on two different computers.  I just tested it with the other one, and the same problem.

EQ doesn't matter. Disable the WDM devices for a test (in Settings dialog). This might be a WDM audio problem, not directly related to the BF.

I disabled all Playback and Recording devices in the sound settings of Win10.  No change.

I wrote: Disable the WDM devices for a test (in Settings dialog). Much quicker, easier and more relevant than your method.

I first looked anywhere in Settings and Preferences, and then in the PDF manual, and couldn't find where I can do that from TotalMix, so I assumed this is what you mean.  Where can I find Settings dialog?

In your notification area. Manual chapter 8. Configuring the Babyface -    8.1 Settings Dialog. The WDM option came in a later driver, set it to 0 and change the sample rate one time to remove all WDM devices.

Somehow I missed it, I was looking for a check box.  OK, I also restarted the computer.  It still won't enter standby mode.  So the only 2 things I am changing are:
Enable MIDI Control
MIDI In: Babyface Midi Port 1
If I disable either the MIDI Control or change the MIDI In to None the computer can enter standby.  I have set the turn off display and sleep both at 1 minute so I can test easily.

Any news if my problem is reproducible on your end?  If it only happens here then I am thinking of doing a clean windows install.  Thanks

I already wrote that it is not reproducable here. Nor did anyone else ever reported this behaviour.

I just reinstalled windows 10.  Clean install, from a newly created boot USB flash drive, with all settings reset to default before restarting (they are now synced), wiping all partitions and reinstalling.  After it installed I updated it, installed my drivers including RME Babyface and did the exact same test.  There is no change, the computer can enter sleep normally, and as soon as both of the settings in the following picture are chosen, the computer cannot sleep.  I have two computers, completely different configurations, with two different RME Babyface interfaces.  There is nothing running on either computer when I test.  I have reinstalled windows on one of the computers, but I can do the same on the other one, if needed to confirm. 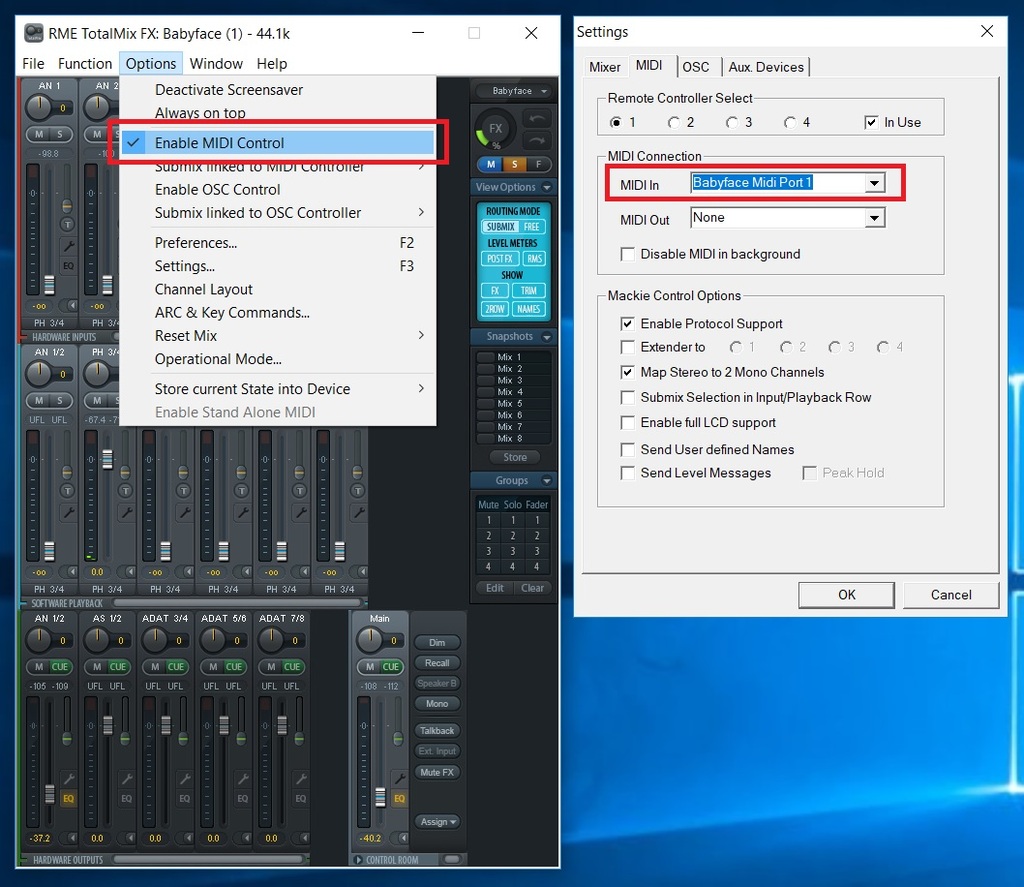 This is what Command Prompt shows: 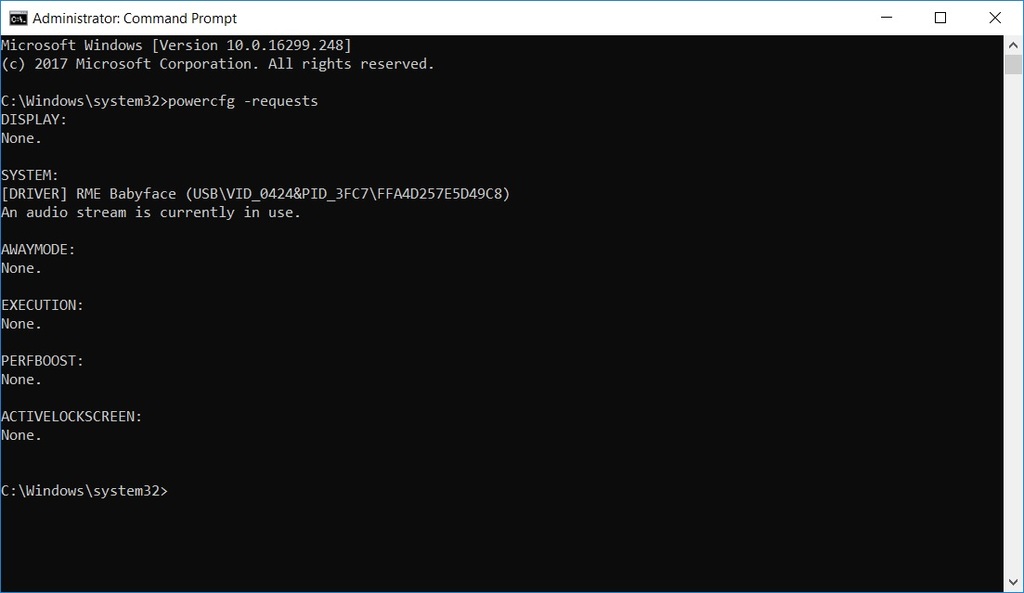 Edit: There is nothing connected to the MIDI in connector, if that makes any difference.

Edit 2: Besides the different hardware, which might not be relevant, since I have two different configurations that show the exact same result, another variable is windows 10 versions and updates.  This could explain why the problem is not reproducible on your end and why nobody ever reported such behavior.  I noticed big differences between windows 10 major updates.  Is it possible that something in windows 10 is causing this problem?

I just wiped all partitions on the older computer (Intel Core 2 Duo) and installed Windows 7 to test if the same thing will happen there.  I had to wait couple of hours for all the updates to install, otherwise they would interfere with standby.  After no more updates were available, and I restarted, and made sure nothing was running the result is exactly the same.  Windows 7 turns off the monitor, but does not allow the computer to enter sleep mode.  As soon as I disable MIDI Control from TotalMix Windows 7 is able to enter sleep mode as normal. 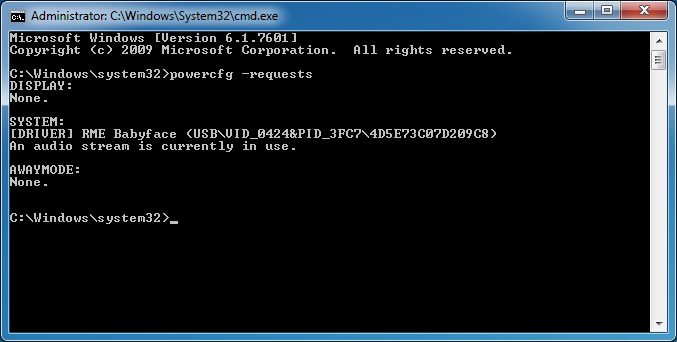 Edit: If somebody happens to read this topic who has RME interface and is experiencing the same issue (or not) please reply here.

I can confirm that 'powercfg -requests' gives the same message on my computers (An audio device...although this is clearly MIDI). Anyway, in both cases sleep still works...

I can confirm that 'powercfg -requests' gives the same message on my computers (An audio device...although this is clearly MIDI). Anyway, in both cases sleep still works...

Thank you for this explanation.  Any idea why sleep works on your computers, and not on mine?

I found a way to force windows to ignore Babyface driver https://en.wikipedia.org/wiki/Powercfg by typing powercfg -requestsoverride DRIVER "RME Babyface" SYSTEM, is this the best way to do it?

pianopictures, thank you for your reply.  If it won't be too much trouble, can you open command prompt as admin (hit start, type CMD, right click and run as admin) and type "powercfg -requests" without the " after your computer wakes from standby, and post if you see anything other than None.

Sure, here you are:

What exactly do you mean be "standby" - sleep mode? So you are not able to put it to sleep mode manually or using the power saving settings so it can't automatically go into a sleep mode after a certain period of time?

I mean it can't go into power saving mode (standby/sleep)  by itself after whatever minutes are set in windows power options.  It is easy to test when you set both "Turn off display:" and "Put the computer to sleep:" at 1 minute in Control Panel\Hardware and Sound\Power Options\Change plan settings.

Edit:  On mine the monitor turns off, as it should, but the computer does not enter standby/sleep.

Now you better described it, so yes, I can reproduce it. Confirmed - not going to sleep mode.

I'll also check that later - never tried it that way.

Ok, I can reproduce it this way. Please be patient, we will need some time to check this in detail.

Thank you. I'm happy that I actually found something worth writing about here.

Hi Matthias, is there any progress on fixing the standby issue?  I just tried the newest version 1.114 driver and I'm still having the same problem.

Unfortunately we were not able to find a quick fix for this behaviour. The MIDI port used blocks Standby via the system itself, and we don't have control over that. A possible workaround would be that we disable MIDI as soon as Standby shutdown queries arrive, but this needs more time and testing. If our disabling of the MIDI port happens after the OS queries its MIDI subsystem it would not work at all...or only on some machines, timing dependent...

Thank you for the reply.  I guess the expected behavior is that when people use a MIDI controller there is a program that's opened and then closed, not running in the background all the time like TotalMix.  I imagine that if somebody is using a large MIDI console to control TotalMix in a studio, the last thing they'll want is for the system to enter standby by itself.

In case anybody runs into this problem, I have found a workaround using powercfg utility https://en.wikipedia.org/wiki/Powercfg that I'm using which forces standby to ignore a system interrupt.

The driver name needs to be enclosed in quotation marks "".