I have been looking at the RME Babyface PRO FS for a while for elemenitating a lot of my clutter of different interfaces for different purposes into one.

Here is a quick ASCII Diagram I threw together of my existing gear, and how I plan to integrate it with the Babyface. 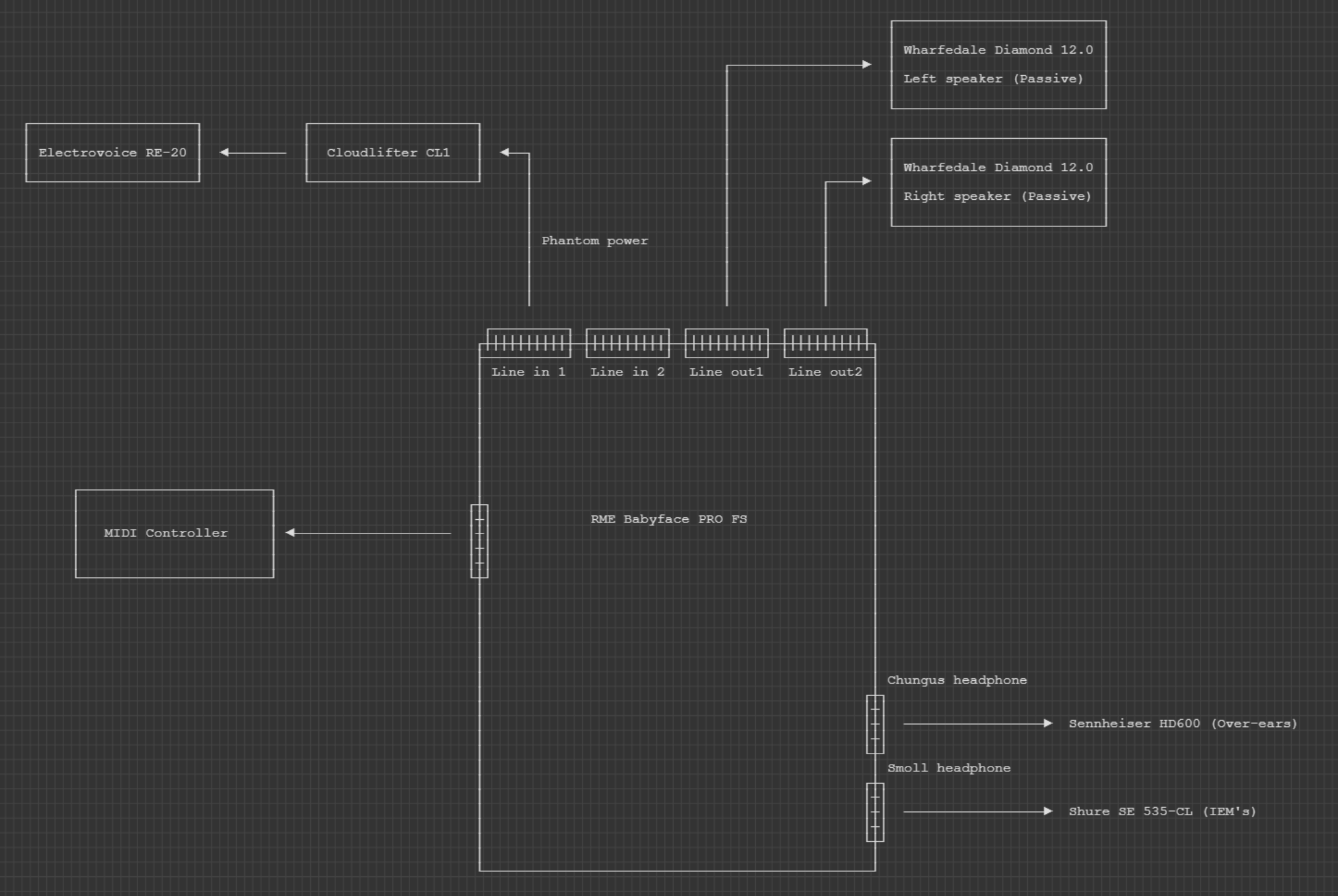 Will the Microphone work at all? And will it sound any good with that sound chain.

Will the passive speakers be powered properly? - The babyface pro fs uses XLR for line in & out, and the speakers uses the 4 weird connectors for a single signal.

The manual just states 19 dBu for active speakers, so am not sure if passive will work here.

Thanks in advance for any recommendations

Maybe it would be good to read the informations and specs once again.
For sure mics work well on the XLR inputs equipped with mic preamps! In my opinion there is even no need for the cloudlifter, the preamps are high quality, very clean and low noise and have enough gain for dynamic mics.
Passive speakers don’t work on line outputs.

it appears as though you're asking if the BBF pro FS will power your wharfdale speakers? it will not.

this is an audio interface for routing signals in and out of your computer/laptop. amplification would have to be provided either by powered/amplified monitors or a separate amp being fed the line level signal from the BBF pro FS.

as for the microphone, I believe it's an active dynamic mic (requires phantom power) which the BBF will certainly provide. I don't know if (or why) you would want to use the cloudlifter, at least not until you find out if the mic preamps in the BBF provide you with enough gain. btw, the preamps in the BBF are fantastic.

I'm not a midi expert so I can't speak to your setup with a controller. The BBF does have midi in/out so, again it should do what you want, provided everything is set up correctly for midi.

**I didn't see your post, Oli until after I submitted mine

Thanks for the quick response.

So if i replace my existing speakers (sell and buy new ones) for a set of active speakers, would everything in THEORY work?

I included the cloudlifter since i already have it from a previous preamp that did not provide enough power.

Yes active loudspeakers are made for connecting them to these Line Outs on audio interfaces.
It will work in REAL.

I included the cloudlifter since i already have it from a previous preamp that did not provide enough power.

It’s not entirely wrong to use it with the RE20 mic but also not really necessary. As you have it already, you simply can try and compare to find the best sound quality.
I have some ribbon mics which sound well directly plugged to my Babyface pro. But using inline preamps (another product comparable to the cloudlifter) give me a slightly different sound. Not better or worse, simply different.

Good to know: the two headphone outputs don’t work independently, they share the same output channels as well as the volume control.