While it's usually difficult to answer the "what's the best PC/laptop" kind of questions, I thought I'd share this...

Based on a recent test in the german c't magazine, I decided to take a closer look at the Acer Extensa 5220: 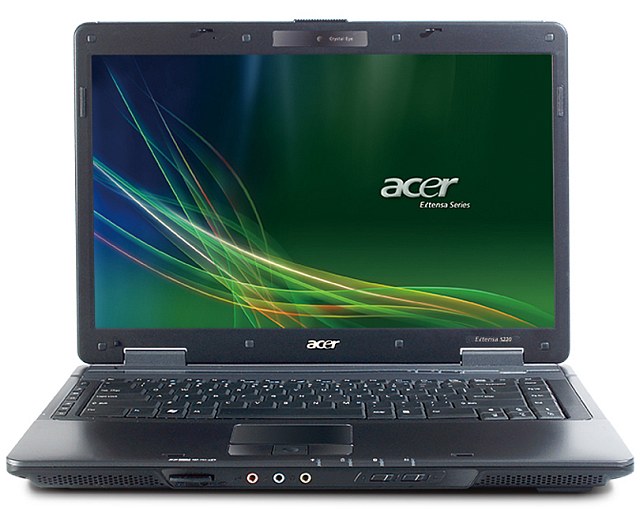 I wanted a laptop with an Expresscard slot without having to spend too much. The review was quite positive, and one important factor was the fact that this machine is full of TI chipsets (as opposed to some more expensive Acers), i.e for Firewire, Cardbus and Expresscard. Yes, it's got both Cardbus and Expresscard, one each. The downside is you can hardly use them together, as they are right on top of each other. But this does not seem to be any different elsewhere. Will see whether it's possible to put the RME Cardbus on top of an eSATA Expresscard...

The price was under ? 350 on ebay Germany. It came with some Linux distro which I deleted right away for XP Home. The price does show in the fact that the drive is relatively small (80 gig) and it's only got a 2 GHz Celeron. But there's an LG DVD-RAM capable drive inside (which is nice because you can easily get DVD-RAM drivers for XP for it). I intend to exchange the CPU for a Dual Core (e.g. T7100, 2x 1.8) at some point, which is said to cause the (fairly unobtrusive, yet audible) fan to turn on even less frequently. If more CPU horsepower is required, the laptop will also support quite a number of faster CPUs (also of the T8xxx series), and the exchange seems manageable (but will probably void warranty). Exchanging the drive should not be much of a problem, either. The screen is 15" (1280 x 800) and it's got one GB of RAM. There's a card reader, 4 USB plugs, Firewire, Gigabit LAN, WiFi, Bluetooth, S-Video output, and more of the usual suspects... The lid and the whole unit feel quite solid, certainly not flimsy. The keyboard is slightly curved, and I don't like it much. Anyhow, I don't intend to do much typing on it. I'm also not a fan of touchpads (prefer trackpoints), but one can get used to it. There's even a PS2 for a mouse.
Unfortunately, it's got a Realtek onboard audio, which causes some kind of conflict, and I had to deactivate it. Not sure whether anything can be done about this, I'd rather doubt it, though.

As mentioned here, I had to decativate the battery surveillance to get rid of moderate DPC latency spikes (not sure whether these would have really caused clicks, though).

Recording 64 channels of 32 bit/48 k audio with a MADIface is no problem. Couldn't test more than 45 minutes, after that, my 40 gig audio partition was full... rant

Recording with the Fireface 800 also works fine, but I didn't try multichannel recording so far. I also haven't really tested the Cardbus yet, and I don't expect problems. I also did not thoroughly test whether the setup was prone to hum coming in through the PSU. I did connect active monitors to the phones output for one recording (with a splitter cable, i.e. unbalanced), and there were no traces of hum or system activity being heard through the speakers.

There are several diffferent varieties of this laptop, it also comes with XP or Vista, if required. A 2 GHz Celeron may not provide a lot of plugin performance, but I will only use it for classical live recordings, maybe some video capture, and possibly some mixing/editing, and it should be more than fast enough for that. As mentioned, faster CPUs can be used.

Hope I didn't forget anything. If there are questions, please ask.

How secure was the MADIFace's Expressbus34 card in the Acer's Expressbus54 slot?
I tried the MADIface on another laptop's Expressbus54 slot. It was extremely unreliable, and would fall out at the slightest provocation. I know Exsys make a stabiliser for 34 cards in a 54 slot, unfortunately it not available in the UK. Would RME consider including one in the MADIface kit, it would only add $2 to the cost of the MADIface & make it much more reliable.

With the Exsys, the connection is ok, see here. In a live setup, I'd probably tape the cable between the Expresscard an an external box to the table.

Did you also try to look for a model with eSATA build in?

Is this quite common that notebooks offer Cardbus as well as ExpressCard? Never heard of that before...

How does the fan behave?

That sounds really good because I have an ACER TravelMate 7720 which has also all EC, PCMCIA and FW chipsets from Texas Instruments (probably the same). Please could you make a Multitrack test with a Fireface 800? I'm thinking about buying one and like to know if it works because in my Magma Chassis I can only choose HDSP 9652 or 1x UAD-1 (of three I have).

The fan turns up every few minutes even when th unit is idle, but the sound is relatively unobtrusive (low-pitch, no whine).
Several notebooks have both Expresscard and Cardbus, but I've never seen one where they were on both sides, making simultaneous use rather difficult...

Will try a FF multitrack test when I get the time.

BTW, the 5220 has got shared memory for graphics, but I don't think that is a problem. And obviously, the onboard graphics are of no use for 3D gaming...

Thanks a lot, would be amazing! Btw, the slots are on mine on one side as well and I thought the same... ed:

First test at 512 samples:
Disk load moves between 5 and 15% or so, CPU oscillates at regular intervals (~2 sec.) between 5 and 60% at a relatively high display zoom factor (with constant redraw during the recording), but drops to between 7 and 20% when I zoom out. The CPU load is obviusly caused by the waveform redraw. DPC latency hovers between 150 and 200 most of the time.

At 64 samples, DPC latency drops to around 30-70 for some reason, with no significant difference in CPU load.

No Firewire transfer errors in the settings dialog. There are some individual DPC spikes up to about 1000 for no apparent reason, one of which at ~1800 did cause one lost ASIO buffer at the 64 samples setting. Trying 256 now. And another spike (when opening the Device Manager) caused no lost buffer any more. Even more safety could be achieved by increasing the number of buffers in Samplitude, I guess.

Fan spins up every few minutes, but does not turn constantly.

Playback during recording is no problem, either (just within the same project, starting somewhat behind the recording cursor).

Thanks for the answer, sounds absolut like something I wanted to hear, perfect. :-)

Will see whether it's possible to put the RME Cardbus on top of an eSATA Expresscard...

No way... ed: fryingpan And that's with the old flat cardbus. Can't connect the cable.
So you can not record from a MADIface to an eSATA drive. Bit disappointing, but obviously not limited to this laptop.

Ok, I had to try this out... fryingpan

I just found a laptop at Best Buy here in the US in the $500 range.

Is this in the same family?

Exchanging the CPU and disk drive is quite manageable, so this laptop now sports a Dual 1.8 GHz CPU (T7100) and a 320-gig internal drive. The CPU fan no longer revs up at regular intervals, which is nice.

I was in a shop just before christmas.the recommended one seems to be discontinued,I had a look on a followup which appeared to have an O2Micro or similar cardbus controller chip.I think it did not even have an onboard firewire.I  just bought  a secondhand travelmate which appears to be similar to the recommended model.Will report back as soon as I have either a cardbus or expresscard for my multif.

For a test, I replaced the hard drive on this old machine and installed W7, which seems to work quite well without much tweaking, even with the battery surveillance and the Broadcom WLAN active...